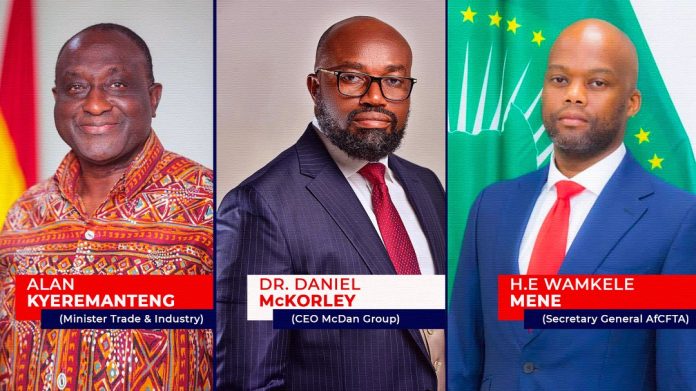 Minister of Trade and Industry, Alan Kojo Kyeremateng has commended the McDan group for acquiring cargo planes and sea trade vessels to facilitate trade under the African Continental Free Trade Area.
The Chief Executive Officer (CEO) of McDan Group, Daniel McKoley has signed a Memorandum of Understanding (MoU) with the Africa Continental Free Trade Agreement (AfCFTA) to signify the beginning of a partnership which will facilitate trade among African Countries.
Speaking at the launch of the AfCFTA Guided Trade Initiative which was held at the McDan Private Jet Terminal in Accra, Trade and Industry Minister, Alan Kojo Kyeremanteng singled out Dr. Daniel McKorley for praise for making the long dream of free movement of goods in Africa a reality.
The minister believes this will enhance the contribution of the private sector in a building a robust economy among African Countries.
“Let me commend one business man who has taken a bold step to make the dream of AfCFTA a reality, Dr. Daniel McKorley who tonight signs an agreement with AfCFTA to commence cargo services within Africa. This is exemplary and other businessmen on the continent must take a cue from this”.
The CEO of the McDan Group says his outfit has acquired two cargo planes and one vessel worth over $100M to facilitate trade among African countries.
Secretary-General of AfCFTA, H.E Wamkele Mene encouraged Africans to support small and medium scale enterprise to alleviate poverty in Africa.
He’s optimistic that in 15 years, AfCFTA would succeed in lifting many Africans out of poverty and hence the need for Africans to support indigenous businesses.
Download WordPress Themes
READ ALSO:
Dr Asiama Exposes Hon Ken Ofori Atta Over Unibank Collapse

No increase in transport fares until November 1