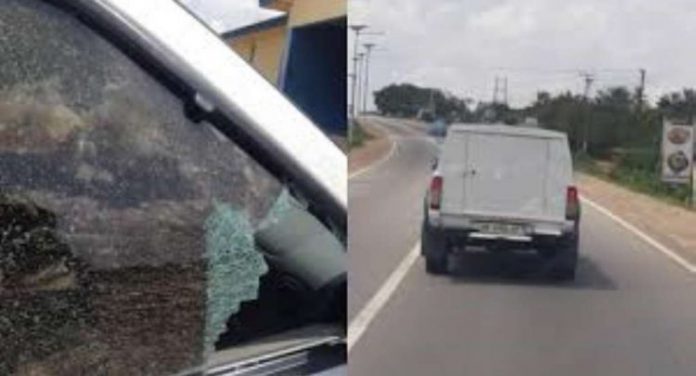 A POLICE officer and two Zenith Bank staff narrowly escaped death when a bullion van they were travelling on was attacked by a gang of armed robbers on the Gomoa Okereko and Dominase highway in the Central Region.

Reports gathered have indicated that the three persons were transporting a cash of GH¢550,000 from the Odorkor branch of the bank to its Winneba branch when the robbers attacked them around 4pm Thursday evening.

The attack, according to information, occurred about 500 meters away from the Okyereko police station.

The robbers reportedly placed leaves on the highway to trick the driver into thinking an accident had occurred on the stretch, compelling him to slow down as he approached the scene.

In the process, the robbers opened fire at the vehicle but were, however, not able to stop the van.

The robbers fled after the failed attempt and run into a nearby bush, the report gathered indicated.

Police reports say the windscreen of the bullion van was damaged, but no casualty was recorded.

Confirming the incident to the media, the Central Regional Police Public Relations Officer, DSP Irene Oppong, said on Thursday, June 17, 2021, around 7pm, an extract of occurrence was received from the Winneba police station that a bullion van with registration No. GN 6956-17 boarded by No. 39089 Sergeant Frank Agyemang and Martinson Odei Gyebi, driven by Alfred Aidoo on special duties from Zenith Bank’s Odorkor branch with cash amount of GH¢ 550,000.00, were shot by an unknown person(s) at a section of the road between Okyereko and Dominase highway.

“The police in Winneba escorted the bullion van back to the Odorkor branch of Zenith Bank so all passengers escaped unhurt and the money in the van remained intact,” she said.

She indicated that the case was being investigated to get the perpetrators arrested.

It would be recalled that the Ghana Police Service has threatened to withdraw its officers who escort bullion vans of banks to various destinations across country if the management of the banks fail to provide fortified armoured vehicles for carting currencies.

The Inspector General of Police, James Oppong-Boanuh, has therefore given the Ghana Association of Bankers (GAB) up to the end of June, this year, to provide the prescribed bullion vans or lose the escort services of the police.

The directive has been necessitated by the recent killing of a police officer who was escorting a bullion van by armed robbers at Adedenkpo near James Town in Accra.

The police officer, Constable Emmanuel Osei, was shot in the head when the four armed robbers ambushed the bullion van on Monday, June 14, 2021.