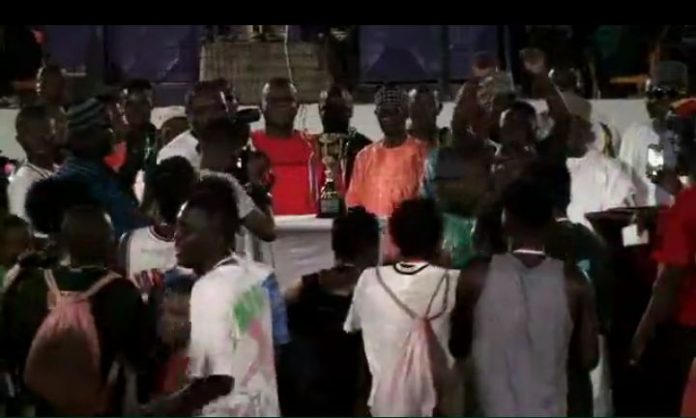 Awoshie has been crowned winners of the 2023 Maulid Community Gala after beating Russia 2-1 in the grand finale.

The gala which is the 7th edition is held annually in line with the 55th Greater Accra Regional Maulid celebrations by the Islamic communities.

This year’s event which attracted 16 communities across the capital witnessed some top-notch individual and team performances.

During the early embers of the final game, Awoshie netted their first goal on the score sheet through Adusei Richard in the 10th minute.

The long drive shot from Adusei striked both goal post before entering the back of the net. The goalkeeper of Russia had little chance of saving the powerful shot.

Russia, however, came back stronger to level the game in the 23rd minute after a long through pass to Ibrahim Mahama who placed it nicely at the top left corner of the goal post.

It became a ding-dong affair as Awoshie were eager to score more goals with Russia also pressing harder.

The first half ended 1 apiece.

The second half saw both teams delivering spectacular sportsmanships, skills and bravery. Goalkeepers of both teams also made some wonderful safes, with the supporters going gay at the skills exhibited.

Awoshie who kept pressing with long shots from the left wing in the half of Russia, managed to put the second up through Cecil Addo in the 47th minute.

The defenders of Russia could not deter him from scoring as he dribbled pass them within the 18 yard to find the back of the net.

Russia, the favorites who had massive support from the home fans, unfortunately did not see the best side of their game as the referee whistled to end the proceedings at the Lord’s Wembley Plus.

The game ended 2-1 in favor of Awoshie.

Richard Appiah of Awoshie and Charles Manu of Russia were adjudged the best goalkeeper and best player of the tournament respectively.

The distinguished leader of the Shukura community, Sheikh Yahaya Amin and his entourage were in attendance to grace the final.

Other dignitaries within the sports cycle, former footballers, Islamic leaders as well as political activists also throng in to have a glimpse of the event.