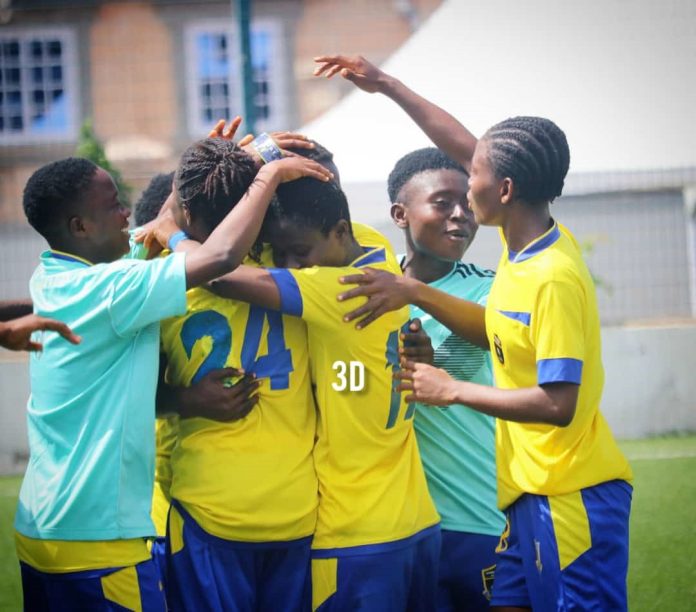 Accra based Women’s Premier League side, Faith Ladies have been crowned champions of the 2022 Women’s Super Cup after thrashing Ampem Darkoa ladies 3-1 at the Aliu Mahama Sports Stadium in Tamale.

A brace from Maafia Nyame and a superb goal from Jennifer Kankam were enough to overcome Mary Amponsah’s only goal for Ampem Darkoa Ladies.

The first half looked very exciting as both sides seemed very strong in their halfs giving no chance for the forwards to make their way through.

Ampem Darkoa Ladies, who were seen to be the favourites in the final clash kept the ball to themselves, releasing it like it was nobody’s business to widen up the midfield of their opponents to grab an early goal.

Their efforts finally paid off in the 15th minute with a beautiful goal as Amponsah managed to grab an opener to put her side in the lead.

Faith Ladies began finding their way into the game right after Ampem Darkoa took the lead, creating some impressive chances to announce their presence to their opponents, but their efforts were not enough as the Centre Referee brought the first half of the game to a close.

Both sides came into the second half looking very strong having received some pep talks from their coaches.

Ampem Darkoa Ladies were still in control of the game until a solid finish from Faith Ladies’ Nyame was all the team needed to begin their comeback campaign.

Faith Ladies kept on mounting the pressure onto the Women’s Premier league champions, using the wings as an easy route to break the defense of their opponents.

Their mission could not be accomplished after they were held by Ampem Darkoa Ladies to end the 90 minutes on a 1-1.

The extra time was really an intense one as both teams were more physical on the pitch than being tactical with their play, as the defenders of the two sides kept their lines clean in the early minutes of the game.

Nyame once again got her name on the scoresheet 20 minutes into the second half with a beautiful goal to beat the Ampem Darkoa wall.

Faith Ladies’ Kankam found the net to inflict more pain in the wounds of their opponents in the dying minutes of the game to put the game to bed.

Fabulous Ladies’ Princess Owusu proved to be the best again after winning the highest goal scorer of the tournament with eight goals to her credit.The forward finished the 2021/2022 Women’s Premier League season as the top goal scorer and has proved her point in this tournament again.

Mary Neequaye of Faith Ladies also emerged as the best goalkeeper of the season after winning the Super Cup with her club.

The Coach of the season award went to Faith Ladies gaffer, Raymond Fenny.