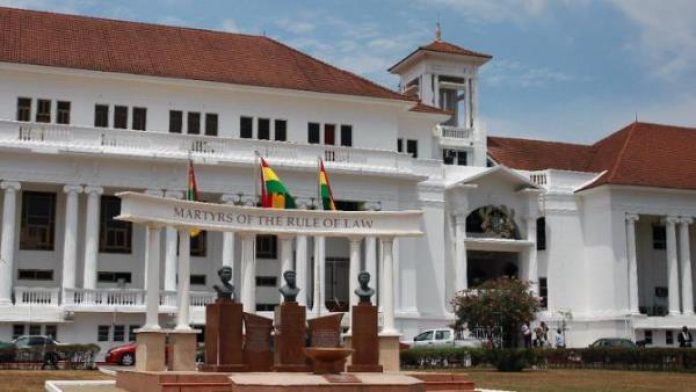 The Supreme Court in a unanimous decision have dismissed the suit challenging the constitutionality of government’s decision to limit the referendum for the creation of six new regions to only the affected areas.

The Court said the plaintiffs failed to invoke the original jurisdiction of the Court to interpret portions of the 1992 Constitution with respect to holding referenda in the country.

A seven-member Supreme Court panel presided over by Justice Sophia Adeniyira in its ruling said Article 5(4) of the 1992 Constitution was clear in meaning and unambiguous and therefore, there was nothing that arises for interpretation.

The Court said Article 5 mandates the Commission of Inquiry to specify the areas, where the referendum should be held, whiles the Electoral Commission was mandated to prescribe the manner in which the referendum is to be held.

READ ALSO:
You will still lose 2020 polls miserably even if Lordina is made EC Chair - Mahama told

On September 12, 2018, three persons; Mayor Agbleze, Destiny Awlimey and Jean Claude Koku Amenyaoglo filed a case at the Supreme Court seeking an interpretation of Article 5 of the 1992 Constitution, which deals with the creation of new regions, and merger of regions.

The Article, which they seek interpretation states: “Where a commission of inquiry appointed under clause (2) and (3) of this article finds that there is the need and a substantial demand for the creation, alteration or merger referred to in either of those clauses, it shall recommend to the President that a referendum be held, specifying the sues to be determined by the referendum and the places where the referendum should be held”.

It was their argument that the recommendations of the Justice Brobbey Commission that the upcoming referendum should be carried out in the areas affected by the proposed regions and not the entire regions affected by the possible division was unconstitutional.

According to the plaintiffs, the decision to limit the referendum to only the six areas where the proposed regions would be created violated Articles 5(1)(a) and (b), 5(4) and 42 of the 1992 Constitution.

In the plaintiffs’ view, the framers of the Constitution intended for every member in the existing region to decide on the need for a new region and, therefore, it would be unreasonable to limit the voter registration exercise to only the parts recommended to be created as new regions.

The plaintiffs further argued that Article 42 of the 1992 Constitution stipulates that all persons eligible to vote in a referendum or election in a region must vote.

On August 15, 2017, the Council of State advised President Nana Addo Dankwa Akufo-Addo to appoint a Commission of Enquiry to look into the need to create six regions and make recommendations on all the factors involved in the creation of the new regions.

The Commission, known as the Justice Brobbey Commission, which was established pursuant to Article 5 of the 1992 Constitution and Constitutional Instrument (CI) 105, commenced work on November 21, 2017.

The Commission recommended to the President that the referendum be limited to the proposed new regions.

The Electoral Commission has set December 27, 2018 for the referendum to take place.