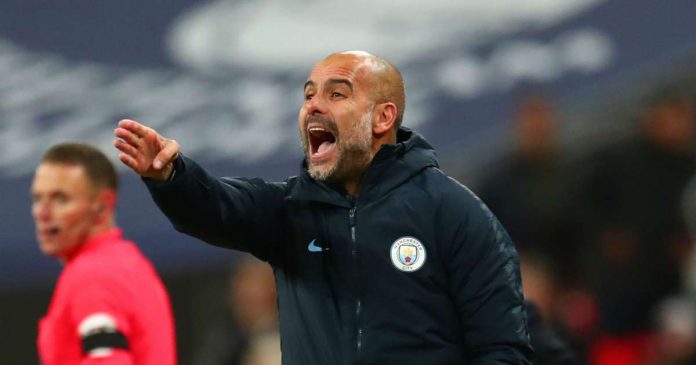 Manchester City still have room for improvement despite an unbeaten start to the Premier League, according to Pep Guardiola.

Pep Guardiola has demanded further improvements from Manchester City if they are to challenge for Premier League and Champions League honours.

City moved back to the top of the Premier League on Monday with a 1-0 victory over Tottenham at Wembley, Riyad Mahrez’s goal the difference as Guardiola’s side made it 10 games unbeaten in 2018-19.

Liverpool and Chelsea are also yet to taste defeat this season, with the latter only trailing their two rivals by two points.

In Europe, City put in one of their most dominant displays in last week’s 3-0 win at Shakhtar Donetesk, but despite their impressive start Guardiola still believes they can be better.

“We have a lot of things to improve, individually [and] collectively to be a real contender,” he told reporters.

“Of course, we are a very good side, I’m not saying the opposite but when you’re going to play in the important stages in the last third of the Premier League, especially in Europe, we demand another issue and other points that we don’t have.

“And hopefully we can talk about that, we can train and be conscious about that and maybe in the future we can improve it.

“I think last season we were so solid defensively as well, we conceded few goals and few chances but of course when we play at the Emirates Stadium and Anfield and here [Wembley], it’s natural you concede chances when the opponents are so good and so tough.

“That’s pretty normal so it’s not a problem but it’s important, to create…it’s more [important] than the clean sheets.”

When asked if he thought this season’s City squad was better than 2017-18, Guardiola added: “Well I don’t know.

“It’s quite similar in terms of they want to play the same managers, the same players – just one new player Riyad, the other ones are the same. [It is] important in every game to try to be better than the opponent. That is the only target.”

Mahrez dedicated his goal to Leicester City chairman Vichai Srivaddhanaprabha, who died in a helicopter crash following the Foxes’ 1-1 draw with West Ham on Saturday.

Guardiola never doubted the former Leicester winger was fine to feature against Spurs, though, hailing Mahrez’s professionalism and hunger to succeed.

“Of course, everybody, all of us, we spoke with him, [asked him] how did he feel,” he said. “Of course it’s a big loss for all the families in Leicester and of course Riyad was part of them for many, many years and it was tough.

“But I didn’t speak with him in terms of how he feels to play because I know how competitive he really is and how he likes to play in big events, big stages and the personality of a player sometimes helps to – not forget, because it’s impossible to forget – but to leave it in a better way.”

Wasiru Mohammed to Move Up In WBO Ratings

Forum for Actions on Inclusion, Transparency and Harmony (FAITH) Kicks Against Vigilantism ahead of 2020 Elections