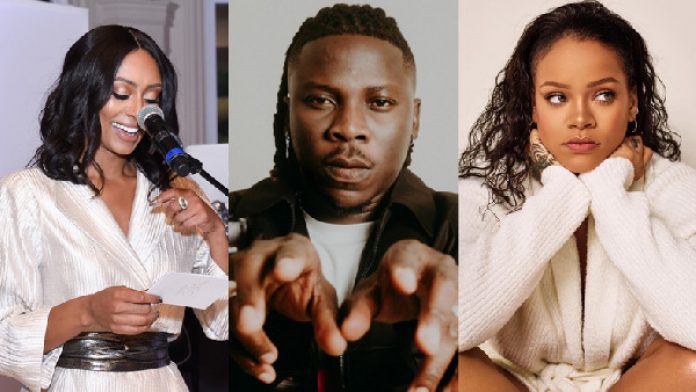 Keri Hilson has joined Stonebwoy during an Instagram live session for a chat about working together.

The Ghanaian dancehall act featured the American singer on “Nominate” a song on his new “Anloga Junction” album which was released last Friday, 24th April 2020.

During the pair’s interaction with their fans, Rihanna’s name popped up in the conversation.

A fan asked which American artiste Keri would love to see collaborate with Stonebwoy after her experience of working with the Ghanaian dancehall act and she said: “I’d love to hear you and Rihanna”.

The “Knock You Down” singer whilst explaining her pick, said “ she is like she kills that vibe so effortlessly. You know she’s from the Islands, from Barbados, so I think it will really be cool hearing y’all two voices on record”.

Stonebwoy gave it an affirmative response saying that “and it will even be colder hearing the three of us on a song”.

However, Rihanna about 4 years now hasn’t done any song yet leaving her fans bugging her all the time to drop something.

Could she possibly come back on a Stonebwoy song as Keri Hilson did after taking a 7 years break in music?