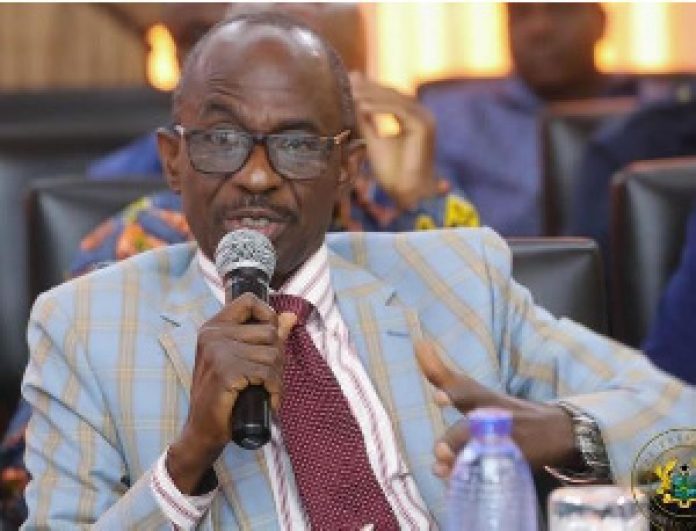 Johnson Asiedu-Nketia, the General Secretary of the opposition National Democratic Congress (NDC) has declared that provisions in the 1992 Constitution which bar political parties from participating in District Assemblies Elections were now obsolete.

He said having operated the 1992 Constitution for more than a quarter of a century, it was clear that they needed to take a second look at it.

Asiedu-Nketia said this at the weekend in Accra at a Multi-Stakeholder Conference organised by the Ghana Catholic Bishops’ Conference with funding from the Konrad Adenauer Stiftung.

The Conference seeks to sensitise Ghanaians on the upcoming referendum on the election of Metropolitan, Municipal and District Chief Executives (MMDCEs), slated for December.

Article 55 (3) of the 1992 Constitution prohibits political party sponsorship of candidates for elections to District Assemblies or local government units; however, the ruling New Patriotic Party (NPP) Government has proposed a referendum to amend the constitution to allow for the election of members of district assembly and MMDCEs based on political party representation.

Mr Asiedu-Nketia said: “I was one of the architectures of the 1992 Constitution. And since I served on the Decentralisation Committee of the Consultative Assembly (the body which drafted the 1992 Constitution), who were directly responsible for crafting the provisions as they exist now, let me say however, that laws are made to deal or respond to situations at any point in time”.

“And that is why when laws are made; there is always provision for amendments. When the situation changes and the law remains, it means that the law will fail to serve its intended purpose.”

He said at the time they were making those provisions, there were genuine reasons that made those provisions necessary at that time; declaring that “however, having operated the constitution for more than a quarter of a century, it has become clear that the provisions need a second look at”.

He recalled that in those days the country was moving into multi-party system with all the fears that were expressed by sections of that society that partisan politics would lead to divisions.

He said by then, there were concerns about national unity and the possibility of national disintegration; stating that those were the concerns that informed those provisions at that time.

Mr Asiedu-Nketia said it was also thought of at that time that mobilising citizens at the local level for communal labour and other things would be better facilitated when it was done without partisan politics.

He said having since operated the 1992 Constitution, the shortcomings of those provisions had become clearer by the day.

He said that for instance, in a situations where a partisan superstructure was imposed on a non-partisan foundation, there would always be frictions at the interface between the two systems; adding that this led to the infamous Municipal Chief Executives (MCEs) and Members of Parliament (MPs) conflicts all over the country that characterised Ghana’s democracy.

“We’ve seen cases where because of these conflicts, MPs are even forced to promise what they cannot deliver,” he said.

He said however, it must be noted that the development projects that happen at the local level falls under the jurisdiction of the MCEs; stating that “meanwhile it is the MP who goes to the people to ask for votes. The MCE doesn’t go”.

“I believe that if the MCEs are also on the field there campaigning for votes, they will be better placed to promise what is within their responsibilities to deliver.”

Mr Asiedu-Nketia said the election of the MMDCEs would go a long way to eliminate the conflicts between them and their respective MPs.

John Mahama gives out Glucometers to diabetes patients on his 63rd...