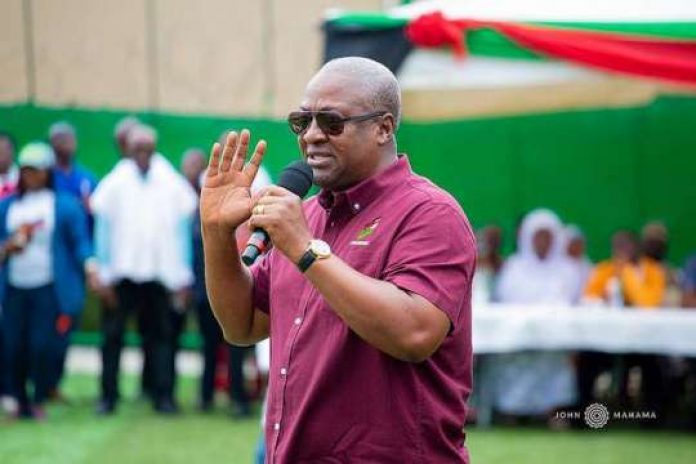 Former President John Dramani Mahama and flagbearer of the National Democratic Congress (NDC) has began a four-day tour of the Central Region with a promise to revive an abandoned cold store project at Nyanyano in Gomoa East to boost fishing activities.

This, he said would create jobs and improve the living conditions of the people. In collaboration with partners, Former President Mahama said the move was in line with the party’s

manifesto pledge to create jobs especially for the teeming unemployed youth while improving the living conditions of the citizenry.

Awutu Senya East district ,where for the flagbearer of the NDC and his delegation paid courtesy calls on the chiefs and people and addressed separate durbars.

The NDC Presidential candidate also assured the people of their commitment to establish a salt factory at Nyanyano to create jobs for the teeming youth in the area.

In addition to that, the party relished creating jobs for over 5,000 youth with employable skills and support

them with finance and logistics to sustain their businesses, grow and expand to create more jobs.
He promised the fishermen of a state-of-the-art landing beach and depoliticisation of premix fuel

READ ALSO:
We Want To Reduce Cost Of Power – Bawumia

distribution by setting up a new committee to oversee effective distribution of the fuel, while instituting measures to tackle smuggling and diversion.

On road infrastructure development, Mr Mahama committed his government to completing all abandoned roads and expressed shock at the terrible nature of roads in the area.

Touching on education, he said he would not abolish the free Senior High School (SHS ) programme, but rather improve on it.

That, he said, would be done by completing the 200 second-cycle institutions he promised to construct

during his tenure of office and build more in a bid to abolish the double-track system.

NPP polling agents and council of elders demonstrate against MCE

Man, 25, Arrested For Arson At Sege