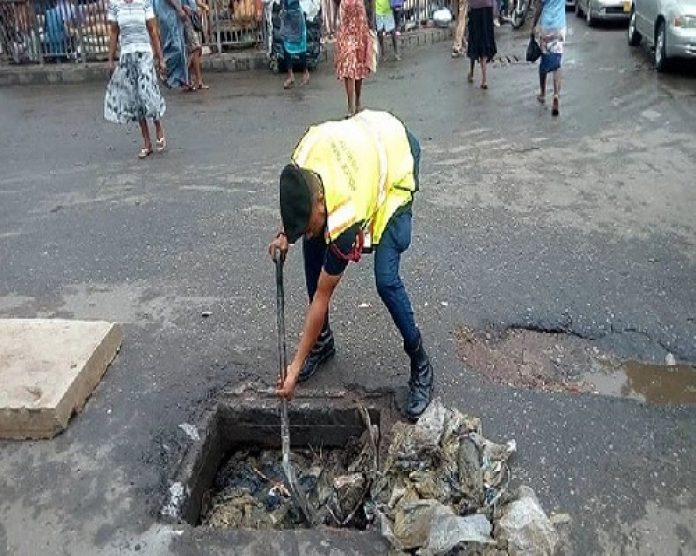 Lance Corporal Simon Agbeko, a police officer stationed at the Accra Regional Command has won the hearts and admiration of many Ghanaians again after he undertook some community service.

This time around, the benevolent police office officer has gone to desilt choked drains and constructed a concrete slab with his own money to cover the gutter at Tudu in Accra Central to forestall any mishap from happening to drivers and passengers.

The police officer descended into every gutter to ensure there is the free flow of wastewater.

The gutter got damaged and was not repaired for about six months which poses danger to the lives of Ghanaians.

He described the state of the gutter as dangerous and a threat to life, hence giving back to the community.

He said “the purpose is to improve flow, once he removed these solid wastes which normally obstruct flow” adding that “flooding will be reduced to the barest minimum.”

He has called on the Accra Metropolitan Assembly (AMA), the Ministry of Roads and Transport and the appropriate authorities to take effective and efficient actions to save traders, pedestrians from an avoidable tragedy in the future.

He also called on Zoomlion to clean the debris on the road after removing the waste in the gutter.

Notable among the numerous services Lance Corporal Simon Agbeko has rendered is the fixing of a broken-down traffic light at Odorkor in Accra and the donation of wheelchairs, canes, and crutches to physically challenged persons on the streets of Accra and in various mosques and homes across the capital. He disclosed that the charity work he does, which has endeared him to many Ghanaians, is a manifestation of God’s divine directions he receives in his dreams.