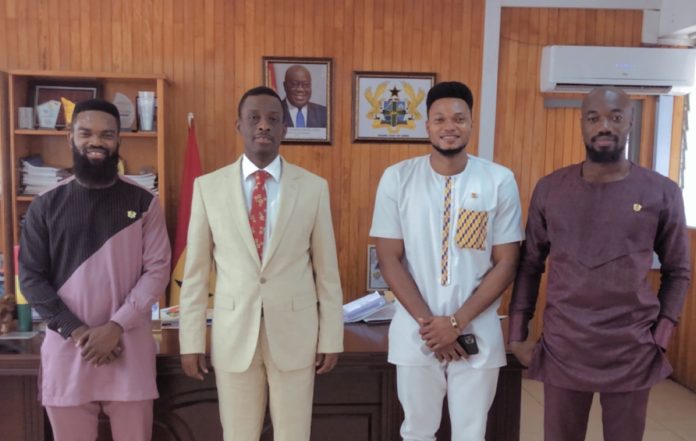 The regional minister of Sekondi – Takoradi, Hon. Kwabena Okyere Darko-Mensah believes the introduction of Ghana American football in the region would be of great benefit to the youth and country as whole.

He made the statement during a special visit by the Director of Development at Ghana American Football Federation, Mr. Mohammed Osman on Tuesday, 11th January, 2022.

The official visit was aimed at officially introducing the sport to the minister as well as exploring all possible innovations of expanding the game through the region.

According to the regional minister, the game has a lot of economical benefits when properly invested.

He said the Ghana American football is an exceptional sport and would improve the well being , health and attract more international opportunities to Ghanaians when introduced.

“The game is welcomed to the region, it is my interest that the game will attract more investors to the region. I believe there is a great investor driven factor being brought to the region,” he said.

He, however, urged the Ghana American Football Federation, GAFF, to outline measures of expanding the game to other regions as well.

“The Ghana American football is a great game, so I would encourage you to put out measures and ideas so that it is expanded to other regions for Ghanaians to benefit,” he stated.

The Minister also suggested some possible land locations for the establishment of a standard American football facility.

The Director of Development, Ghana American Football Federation, Mr. Mohammed Osman expressed his gratitude to the minister for the support.

He said the federation is open to all Ghanaians especially foreign and local investors across the globe.

He stated that the promotion and development of the Ghana American Football requires financial support.

“We call on all companies, corporate entities, sports enthusiasts to come on board to support our activities of development to help push the gams across the regions,” he stressed.

The special visit witnessed the presence of Mr. Prince Bonney, CEO of ICODE and Mr. Isaac Apasondaisy, director of Apson group of companies.

Get in touch with Ghana American Football Federation via WhatsApp: 0202821105 / website: affgh.com and Instagram: @ghanaamericanfootballfed
for more enquiries.